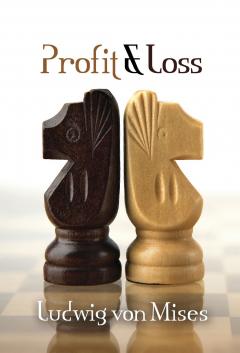 Profit and Loss is a short book (some might say a pamphlet) by the great economist Ludwig von Mises on just 56 pages about what profit actually means and the significance it has for the entrepreneur and the economy at large. He dispels common myths about profit and the entrepreneur that is not only held by Socialists but also to a large degree by the everyday Keynesians and Social Democrats.
Profit, he says, is actually not another source of income that the entrepreneur gets by paying the worker less than his work is worth, like the labor theory of value theorists would say, but rather the prize for correctly anticipating the wishes of the markets by investing in capital and organizing it efficiently with labor and land before the prices of the capital increase as a result of that anticipation. In his words,

What makes profit emerge is the fact that the entrepreneur who judges the future prices of the products more correctly than other people do buys some or all of the factors of production at prices which, seen from the point of view of the future state of the market, are too low.

This is what is really meant by the revenue exceeding the costs of the business' operations. For the entrepreneur to attain profits in a market-free economy, he must then speculate about what the demand in the market will be in the future. If he expects it will increase, or just that the current demand isn't satisfied based on the current supply, he has the incentive to undertake his operations. If he makes the wrong prediction he would be at a loss.
Mises goes so far in the book as to say that "Every step toward the elimination of profit is progress on the way to social disintegration." Why would he say that? Well, to put it very simply: Where there is consumption, there must also be production. As the organizer of production, the entrepreneur, must use a great deal of time, money, effort and risk on his project, he would generally not be very eager to do it pro bono without getting something in return. That is how profit works as an incentive. Without that incentive, as Mises pointed out in a different book [Liberalism], the only reason to do entrepreneurship would be from a sense of duty. But in addition to the incentive argument, there's also the case that this speculation that's caused by the idea of profit and loss in a sense "makes the consumer the boss of the entrepreneur" in the sense that the entrepreneur actually has to pay really careful attention to the future market lest he makes the wrong call for his business. Therefore, says Mises, "Taxing profits is tantamount to taxing success in best serving the public."

From what is heard from the mainstream, one tends to generally get a bad image of entrepreneurs as greedy and corrupt. Some certainly are, but from what is attained from the entrepreneur acting according to the free-market process (without special privileges and transfers attained through lobbying the State), I think one should certainly be grateful for all the incredible contributions entrepreneurs have made for the economy and the new opportunities it has given the public, and still continue to do so.

The book can be read for free online at https://mises.org/library/profit-and-loss-0. The Mises Institute also has a ton of other great books and articles available for free.
Top

Thanks for the review. I'm going to have to give this a read (perhaps sooner rather than later since you shared a link to it

I think one of the biggest problems a lot of people that are *left* leaning face is that they conflate capitalism with corporatism. When your entire concept of "profit" and "capitalism" are based around the idea that the government picks winners, it's hard not to say "we need to prevent that kind of behavior."
But, based on your review, Ludwig von Mises hits the nail on the head. It's a guessing game, and those with the best guesses make the most profit.
Top
Post Reply
2 posts • Page 1 of 1