I think I'm on the last chapter of this interesting read, by Dr. Haha Lung and Christopher Prowant. For sure, this book has some mind-expanding content in it. 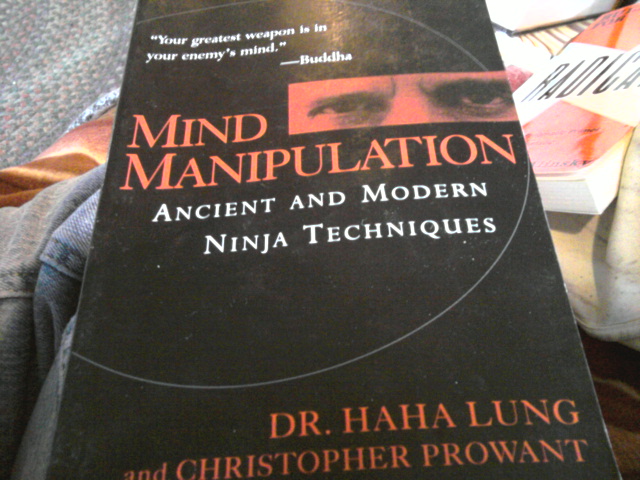 Summary: Modern methods of mind control--employed in propaganda, indoctrination, even advertising--can be traced back to Ninja strategies of psychological warfare developed and refined centuries ago in medieval Japan. The Ninja were accomplished in covert operations such as espionage, assassination, and sabotage, and were feared for their ability to break through an adversary's mental defenses and use his fears, insecurities, superstitions, hopes, and beliefs against him.

Written by noted martial artist and scholar Dr. Haha Lung, MIND MANIPULATION is a clear, modern-day guide to effective Ninja techniques, including: Revelation of an Enemy's Deepest Secrets - Ways to Implant False Memories - How to Detect When Someone is Lying - Visualizations to Affect Physical Health

You will also learn defenses against mind-manipulating techniques commonly used in media and politics. Psychological warfare is an unavoidable reality in today's world. The lessons in this book will prepare you to meet any challenge.

Dr. Lung has mentioned and written about subjects such as MK Ultra, the power of visualization (symbolism), and the power of belief. He explains in clear detail on what he has researched about the ancient ninja manipulation techniques.
blog: http://no-apologies.dreamwidth.org
Top
Post Reply
1 post • Page 1 of 1