I recommend reading Educating for the New World Order, by Beverly K. Eakman. This was what got me started in researching on psychological warfare designed to brainwash teachers before the brainwashing of students could take place, and how awful Common Core is - over a year ago. 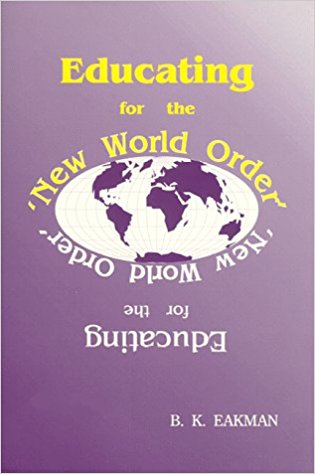 Summary: This is the incredible story of how one gutsy woman stood the whole education establishment on its head and forced a cabinet-level government agency to obey the law. What began as a simple citizen complaint against a local school district resulted in a massive investigation - and coverup - dating as far back as 1965. Education bureaucrats in Pennsylvania never dreamed they would one day be on the losing side of a fight against their Washington counterparts, whom they previously had imagined to be allies. Even less did officials in Washington dream they would be out-maneuvered into opening a Pandora's Box of white papers, position papers, working papers, official memos, appropriations, review boards, "secure" lists, and task forces that eventually would reveal one of the most unique and mind-boggling cases of misrepresentation in American history.

Anita Hoge herself did not expect to be declared winner in a case against the U.S. government - even before it went to court, and before she had a chance to make her case public.

Before I had read this all the way through, I never would have ever known or taken interest to learning in-depth about the psychological warfare technique (the Delphi Technique) that was developed by the Rand Corporation during the Cold War. I also first learned about the Education and Information Resources Center (ERIC) website, about previous data mining on private information about students and their families, and information on this odd personality profiling test that was being fraudulently passed off as academic assessment test.

There's also notations of extra information after the epilogue.

You won't find out about any of this from reporters on the corporate media networks.

I found Anita Hoge on Twitter not long after I finished reading Beverly Eakman's book (HogeAnita and HDawn29 are her two account names). She's very determined and courageous to stand up for civil family rights. She's written articles for a few websites too, such as Freedom Outpost ( http://freedomoutpost.com/author/anitahoge/ ) and News with Views ( http://www.newswithviews.com/Hoge/anitaA.htm ).

You can find interviews and speeches by Beverly Eakman on YouTube. She's also written more books that I hope to read one day, such as Cloning of the American Mind: Eradicating Morality Through Education and How to Counter Group Manipulation Tactics: The Techniques of Unethical Consensus-Building Unmasked (in which is out of print - maybe I'll find a PDF version of this).